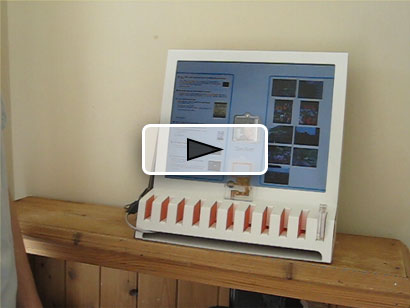 jive is an innovative experience concept designed to address
a social need.

While jive is a simplified communication device, there are some new and novel technical details under the hood.

These are protected under a UK Patent 0808775.1. If you are interested in licensing part of my technology please contact me. 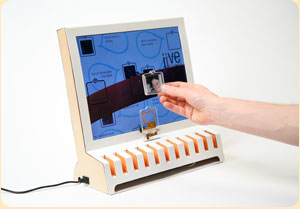 tangible user interface. = Place something on the screen and the screen will co-respond to what you just did.

When a friend pass is placed onto betty, that persons details appear on the screen. The position of the friend pass on the screen also dictates what the function is. There are 3 main functions of the jive interface. 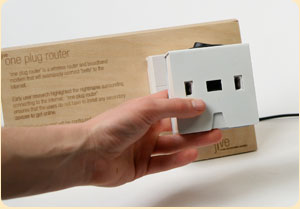 jive come with a 'one plug router'. When jive is purchased all setup details are embedded into the router. This means that the user just plugs that router into the phone, plugs in the power and flicks the switch.

The router was designed to the size of UK telephone socket, the router simply overlays so the router doesn't seem as such as an intrusive device as normal routers.

The friend pass is a key a physical link to a friends digital life. When a friend pass is placed onto betty the latest updates, news and messages are displayed on the screen.

The illustration to the right shows how various friends already create a wealth on content on various sites. This content will be aggregated by the jive service, which will then display these updates on betty during its various states of interaction.

The techie stuff.
Each friend pass is linked to an RFID, the relationship between rfid and aggregated data will be setup when a friend purchases a friend pass.

In this early proof of concept prototype the RFID reader is built into a separate stand. If this product was to be developed further RFID readers would be an integral part of the display unit construction. 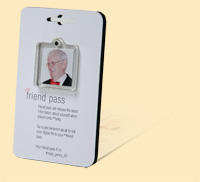 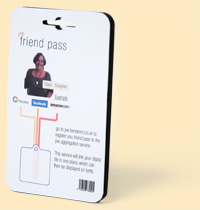 Get back to home page.